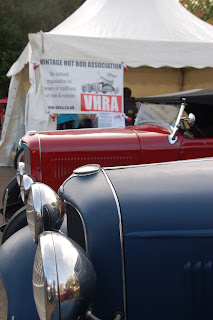 I hadn’t actually been to Prescott before, but having heard about the fun the VHRA were having there, we made the day trip as spectators back last year to take a gander at the Autumn Classic.

It had been very rainy that week, and the limited pit area around the hill was very muddy and slippy underfoot. In addition, the Orchard where most people camp had become a quagmire for vehicles in most places.

Never the less, a fine array of vehichles were there for the hill climb, including race cars, classic saloons and various vintage machinery, Bugatti’s and the like. Being mostly interested in the antics of fellow Flathead owner’s, these are the cars that we watched ripping it up the hill. 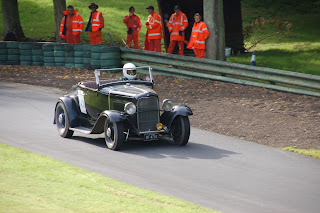 Pete Ayres is a regular at Prescott, and was setting some fine times until a brush with the armco on the last bend dented his pride (and his car). 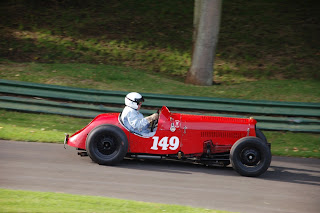 Neil Bennett’s ‘Batten Special’ is also a seasoned hill climber, it was built ‘way back when’, on ’32 Ford running gear and has competed in many types of auto sport over the years, including the Flathead Meltdown at Shakespeare County Raceway.. 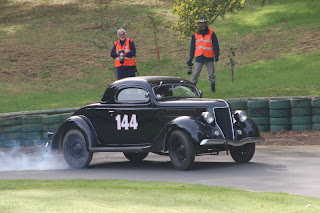 Clark Devey is another VHRA member who never misses a chance to climb the hill in his chopped ’36 3-Window, the Ford regularly lifting the nearside rear wheel on the hairpins resulting in copious amounts of vintage tyre smoke! 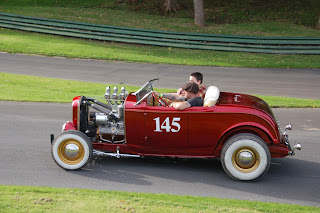 Jim Turnbull’s blown Roadster is another car that’s made the switch from the drag strip to the twisty bits, if this pic looks a bit sedate its because it was taken during the parade of competitors during the lunch break. 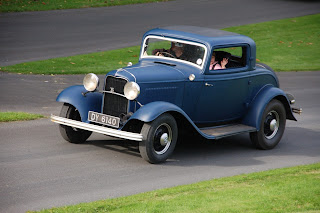 Although Prescott is one of the oldest track’s in the country and owned by the Bugatti Owner’s club, the hot rods of the VHRA have been welcomed whole heartedly and an extra dimension of pre-war excitement to their events. This fruitful relationship has meant that in 2013, the VHRA will be hosting their own exclusive speed hill climb event at Prescott. ‘Gow’ will be held at the end of May and promises to be a very cool new event on the calendar indeed. We WILL be there!

Oh yeah, they even have their own beer! 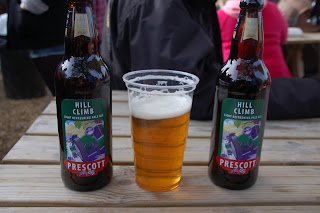 How To Buy And Sell Used Cars For Profit Bizop. Great For Male Traffic

How To Render Amazing 3D Cars in Photoshop ... In Less Than 60 minutes ... GUARANTEED